Whether you swiped a bottle of Tide from Walgreens or committed felony robbery and assault in addition to Los Angeles petty theft, you’re probably feeling pretty sheepish and regretful. You’re not the first person to steal “bizarre stuff” – and you won’t be the last. In two posts, we’re going to use true or false quizzes to test your knowledge of theft history. 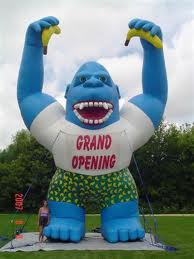 Half of the following examples are made up, and half are real.

Can you guess which ones are which?

1. 310 foot inflatable gorilla stolen from the roof of a Kia dealership

The employees of Simi Valley California Kia dealership arrived to work to discover something astonishing: the 350 pound inflatable gorilla that had bedecked their roof had vanished. Was the wind to blame? Or did some frat brothers grab the gorilla as a hazing prank?

A large indoor golf course on the outskirts of Tokyo worked with police for months to nab three local men (part of a Thai mafia syndicate), who had swiped over 20,000 golf balls from the course. The men pulled a double scheme – reselling some of the balls to oblivious amateur golfers and drilling into other balls to secretly shuttle opium.

Talk about temerity! Many different witnesses saw a man rip a condom dispenser of the wall of a pub and take it home with him. The machine had $32 worth of quarters in it and 48 condoms. Police quickly apprehended him.

On otherwise a peaceful July afternoon, the parents of a 4 year-old Los Angeles girl were greeted with an unpleasant birthday surprise. The “bounce house” they ordered for the party — which had been installed and blown up the night before — disappeared overnight, mysteriously. It turned out that a jealous mom (whose daughter was in the same playgroup) sneaked onto the property and hijacked the bounce house for her own daughter’s birthday. When confronted, the mom admitted to the crime but told police “[my] daughter needs it more because she has more friends.”

A caterer at a Palm Spring’s event facility purloined 13 ice sculptures from a local girl’s bar mitzvah. His plan was to meet up with a contact to resell them for use other catered events. But for whatever reason, he forgot about Palm Spring’s 110 degree heat, and the statutes melted en route. Cops nabbed him after they saw a video footage of him putting the statutes in his truck.

6. Jamaican thieves steal hundreds of tons of sand from a beautiful beach.

According to Ireland police, thieves snatched up tons of sand from a Coral Spring Beach. Local whistleblowers accused the police force of doing nothing and being part of a massive cover up. The crisis ultimately roped in Jamaica’s Prime Minister, Bruce Golding, who had to order forensic tests on the purloined beach sand.

If you’ve been arrested for petty theft in Los Angeles — or any other crime — connect with an experience Southern California criminal defense attorney at the Kraut Law Group today for smart, effective assistance building your case.