As this Los Angeles DUI blog – and practically every other news source on the planet – recently reported, pop icon, Justin Bieber, recently got arr 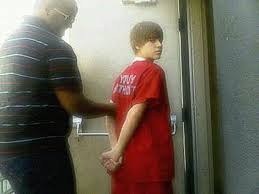 ested for driving under the influence in Miami Beach.

The 19-year-old allegedly had been drag racing with Def Jam Recording artist, Khalil Sharieff, on a Miami Beach road between 26th and Pine Tree Drive. Sharieff raced a Ferrari, while Bieber raced a yellow Lamborghini (worth about $250,000, according to analysts).

Sharieff put up a picture of Bieber on instagram tagged “U know bizzle brought that lambo out,” before the cops broke up the drag racing. Police said that Bieber exhibited classic symptoms of DUI, including “a flush face, bloodshot eyes, and the odor of alcohol on his breath.”

What happens when young drivers – under the legal drinking age of 21 – get arrested for DUI?

Here in California, the crime can be punished under California Vehicle Code Section 23156. The Golden State has a very strict zero tolerance policy with respect to underage drinking and driving. If you have just 0.01% of alcohol in your body (as determined by a breath, blood, or urine test), you can lose your California license for a full year. If you don’t have a license, a violation of 23156 can delay your being able to drive for a full year.

23136 is different from other DUI codes, such as 23152 or 23153 (the injury DUI code), since prosecutors don’t need to show that you had been driving recklessly or misbehaving on the road in any way. To fight back against the license suspension, you will need to go before the California Department of Motor Vehicles.

There is another important underage DUI law to understand; this can apply if you blew a BAC of 0.05% to 0.07%. Drivers under 21 will face an infraction for testing at this BAC level. You won’t get a jail sentence, but you might face a fine and other problems, such as license suspension.

If you’re below the age of 21, and you have a BAC that’s 0.08% or above, you will be treated like an adult by Los Angeles criminal courts and hit with a misdemeanor charge, a steep fine (up to $1,000), jail time, and other unpleasant penalties.

To make sense of what happened after your crash or arrest, connect with former Deputy District Attorney Michael Kraut today to construct an appropriate Los Angeles DUI defense.