In one of the most intense Los Angeles DUI arrests in recent memory, Police Officer Don Thompson — a former bomb squad officer — jumped into a burning Mercedes Benz Station Wagon on the 405 to save a 72-year-old man from certain death. 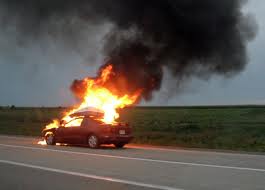 California Highway Patrol authorities say that the 72-year-old was likely driving under the influence of drugs, when he smashed his car in Sherman Oaks (near Burbank) on the 405 near the 101 Interchange. Apparently, he lost control of his 1991 Mercedes Benz, whacked into the right shoulder wall, doubled back across all lanes, and smashed into the concrete. His car then burst into flames.

He had been driving Southbound on the 405 toward LAX, when he saw the explosion. He stopped, pulled to the side, leapt over the center median, threw open the door to the Mercedes and found the 72-year-old unconscious inside. According to Lieutenant Andy Neiman of the Los Angeles Police Department: “the fire was starting to spread inside the passenger compartment… [Thompson] was able to cut the seat belt with his knife, pulled the gentleman out of the vehicle, and two citizens who also stopped and came up and also assisted in pulling the driver further away from the vehicle.”

Thompson suffered serious injuries during the rescue, including first- and second-degree burns as well as smoke inhalation damage. He was transported to Urgent Care for treatment. Neiman called the situation “a Christmas Day miracle,” claiming that “nobody would survive that vehicle based on what the Fire Department observed when they arrived.”

The story indicates the profound role luck can play in Los Angeles DUI events. If you were arrested for DUI – and you’re lucky enough to be reading this – you can be at least thankful that you survived, even if you face jail time and/or if you hurt other people.

Good luck and bad luck happen to everybody. The more important question is: how do you manage that luck? How do you ensure, as author Jim Collins wrote about in his bestseller, Great by Choice, a “good return on luck”?

One of the best ways is to connect with knowledgeable, resourceful people. Get in touch with a seasoned Los Angeles DUI criminal defense lawyer, ASAP, to understand your options and construct a meaningful defense. Connect with Michael Kraut of the Kraut Law Group today.