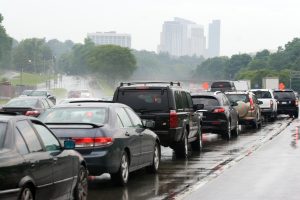 Television is the one medium that has perhaps seen the most profound shift in attitudes toward DUI, and perhaps had the greatest influence on public opinion toward the issue. So profound was the change, in fact, that we can draw a line of demarcation around the year 1983, when the TV movie M.A.D.D.: Mothers Against Drunk Drivers aired on the NBC network. The Emmy-nominated show, which dramatized the story of MADD founder Cindy Lightner and the loss of her daughter in a DUI accident, prompted the State of California (and eventually the entire nation) to pass sweeping legislation tightening existing DUI laws. According to the New York Times, DUI deaths dropped in California by 22 percent after those new laws went into effect.

This TV movie did much more than change the laws; it also sparked a drastic change in attitude, to the point that we can describe TV culture as “pre-MADD” and “post-MADD.”

In the years leading up to 1983, DUI was frequently employed as an overused comedy trope to get laughs. Procedural cop shows, for example, often depicted officers pulling over a visibly intoxicated driver slurring his words for comic relief. While DUI was depicted as a crime, its impact was usually downplayed. At other times, intoxication was simply depicted for comedy’s sake, ignoring the question of whether the affected party ever got behind the wheel.

After the NBC TV movie aired, television writing rooms began taking a completely different tack on the issue of DUI. Frankly speaking, DUI was no longer a laughing matter. Now, when shows tackled the issue, they would do so as a teaching moment. Sitcoms turned temporarily serious during a “special episode” in which one of the characters (often a teen) learned a difficult lesson about DUI. Shows like Cheers that centered around alcohol use went out of their way to stress responsibility and avoiding getting behind the wheel.

As public attitudes shifted, these teaching moments gradually went out of vogue as viewers became more sensitive to “on the nose” messaging. These days, the issue of DUI is often avoided by narrative drama and comedy because of its “hot button” nature. When we do see DUI on television, we usually see it in the context of reality shows like D.U.I. (TLC) or in a historical context (e.g., Mad Men, which aired on AMC from 2007-2015).

Whatever come-to-Jesus moment the TV industry had regarding its attitudes toward DUI, that epiphany seems to have been completely lost on the music industry. Alcohol references in general have infused our song lyrics for many decades—most of this music does get played in bars and clubs, after all—but the music culture has also been remarkably prolific with the idea of getting behind the wheel after having a few—or even while having a few.

From early classics to modern hits, DUI references have remained both common and consistent across virtually all genres, from jazz standards like Frank Sinatra’s “One for My Baby (and One More for the Road)” to ZZ Top’s rock anthem “Arrested While Driving Blind” to Billy Joel’s “You May Be Right” (“You told me not to drive/But I made it home alive”). We find even more examples in the discographies of artists like Ghostface Killah, Snoop Dogg, Schoolboy Q, Kanye West, Death Cab for Cutie, Luke Bryan, Florida Georgia Line, Tyler, the Creator…and that list just scratches the surface. Granted, not all these references point to DUI in a positive light, but taken together, they seem to convey the notion that DUI is simply a fact of life.

This reality begs the question whether music in popular culture helps nurture public apathy about this issue, if not encouraging the practice outright. We have no clear answers and plenty of room for debate. Do songs about DUI have an effect on public attitude toward the issue, or do they simply reflect the culture as it exists? Does music have an agenda, or does it just hold up a mirror? Should songwriters and performers see themselves as role models to potentially impressionable young drivers, particularly where this issue is concerned? Or does the responsibility lie with parents and guardians?

Next, we’ll explore the issue of driving under the influence as reflected in film. Meanwhile, if you are facing charges for DUI, we are here to help. Give our offices a call.