1. Driving under the influence in Los Angeles will not be the only major challenge facing law enforcement agents in 2010 — driving while texting/phoning is also a huge issue. 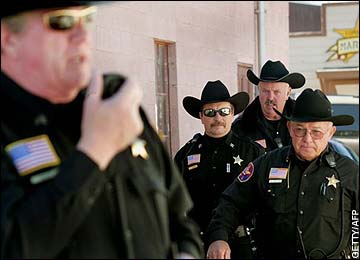 A cell-phone-talking/texting epidemic has overrun Southern California. As more and more people become dependent on mobile devices to get through their lives, more and more drivers become inattentive. Left unchecked, this epidemic of distraction will surely lead to an increase in the number of injury accidents and deaths on our roads and freeways.

2. An increase in media distractions.

We face dangers not just from drivers who text but also from distractions such as flashing billboards (e.g. on Sunset Boulevard), billboards that change as we drive past them (e.g. on Pico Boulevard just west of Beverly Drive), and other intrusive forms of media, such as satellite radio. All these drags on our attention could ultimately lead to an increase in accident injuries.

The California budget crisis has made it difficult for the state to spend necessary money on roadside repairs and upgrades to infrastructure. A dearth of road improvements will almost definitely translate into greater dangers for drivers.

4. The increase in diabetes and obesity in our population poses an indirect hazard to drivers.

As the obesity/diabetes epidemic spreads, more and more sick, inflexible, and medicated drivers are getting on our roads, and this likely poses a serious public safety challenge.

Recidivist alcoholics are at higher risk for DUI. Unless and until we find a more effective and less costly way to curb alcoholism and addiction in our population, we will face a greater risk — not only of Southern California DUI injury accidents — but also of other safety problems.

Today’s youth are bombarded with distractions that did not exist even a decade ago — such as social networking, twittering, and other relentlessly aggressive technologies. These youth may be so distracted by these toys that they fail to attend to basic driving skills effectively.

7. Collective habituation to the dangers of DUI in Pasadena and elsewhere in Southern California.

Although driving under the influence in Southern California remains a serious problem, it is a well-known problem. Thus, we don’t hear about the dangers every day, and this lack of awareness likely contributes to increased risk.

8. Better technology can lead to overconfidence.

With GPS systems and other technological gizmos available to many Southern California drivers, overconfidence can easily result. Put too much trust in any automated system — and relinquish too much control over your automobile — and road mishaps are almost certainly bound to follow.

9. Better safety technology can lead to an increase in risk tolerance.

The advent of antilock brakes was supposed to slash accident rates across the country. It didn’t — at least not to the extent that it should have. One theory for why is that drivers who have ABS tend to wait until later to brake — due to their confidence in safety features. Thus, even though a car built today might objectively safer than a car built in, for instance, in 1985, our collective reliance on “last minute” safety features might ultimately wash out the difference.

10. Failure to get good legal help for charges of Los Angeles DUI…

Attorney Michael Kraut of the Kraut Law Group can deliver excellent and timely service for people hit with charges of driving under the influence in Southern California. Find out more about this Harvard Law School educated former prosecutor today, and learn how Attorney Kraut’s persistence, nearly unparalleled knowledge of prosecutorial system, and priceless negotiating skills can help you resolve your charges.