Palin is being hung in effigy in West Hollywood, California, but police say no crime is being committed. Complaints have been rolling in the local Sheriff’s department by citizens screaming foul play. So far, police have stated that this is an issue of 1st amendment free speech and not a hate crime. The effigy is vice-Presidential candidate Sarah Palin hanging by a noose from the roof with Presidential candidate John McCain sitting on the roof surrounded by flames. This Southern California residence still displays the two candidates as of the writing of this blog article.

Well known republican politician, Michael Antonovich is calling for an investigation of whether the symbol could be a hate crime. The power of this politician has caused the FBI to investigate the actions of the two men that claim that this is just a provocative Halloween prank.

After a review of the facts a spokeswomen for the FBI told the press that what these two men have done may be distasteful, it is not an act of discrimination or illegal. Local law enforcement has come to the same conclusion. Meanwhile, tour buses in this star struck community have diverted their routes to stop at this new tour site in the Los Angeles area. 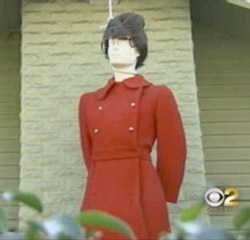 The West Hollywood mayor, Jeffrey Prang, has called for the effigy to be removed because he “strongly opposes political speech that references violence — real or perceived.”

Many people are very concerned that the FBI is not taking this seriously as they did when an effigy of Presidential candidate Barack Obama was hung in a similar fashion, In that case the FBI open a full fledged investigation into that act.

Free speech is often confused with criminal threats or other hate crimes. When a person is investigated for these serious felony crimes, it is best to hire a Southern California criminal defense attorney practicing in the Los Angeles area to protect their rights and possibly stave off criminal charges.