Los Angeles DUI stakeholders – police, attorneys on both sides, judges, criminal defendants, and victims of DUI tragedies alike – don’t know what to make of a Twitter user who goes by the handle “Mr. Checkpoint.” 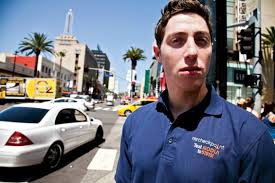 Also known as Sennett Devermont, the 25-year old Santa Monican has taken to calling himself “the drinking crowd’s Batman,” according to a recent article in the LA Weekly.

Devermont has over 42,000 followers on Twitter and an additional 20,000 text subscribers. His free cell phone app, Mr. Checkpoint, has been downloaded thousands of times. Why?

Unsurprisingly, representatives from Mothers Against Drunk Driving (MADD) have been less than thrilled with Devermont’s mission. The Group’s Director of Communications, Anna Duerr, said “We don’t want apps out there that allow people to evade checkpoints.” MADD’s Regional Director for Los Angeles, Pat Rillera, told the LA Weekly: “While we support the publication of checkpoints as a deterrent to drunk driving, sites like Mr. Checkpoint alert drunk drivers so they can evade arrest. It’s not meant as a positive.”

Devermont disagrees. He’s found support from among many people who passionately want to punish DUI drivers and make streets safer. Defenders believe this app can deter people who are on the bubble from driving — that is, to encourage tipsy folks to take a cab, find a designated driver or walk home.

Devermont usually starts sending out his alerts during the evening, based on information provided by Sheriff and Police Departments in Los Angeles and San Diego. The app does have a box — which you must check — wherein you agree that you will not drive under the influence.

Devermont said he came up with the idea while enrolled at San Diego State University. Police pulled him over after a party. He was 18 at the time. Police forced him to go through the paces of several field sobriety tests. (These can include the finger to the nose test; the stand on one leg test; the count backwards by threes test and the horizontal gaze test).

Police told Devermont that he failed, but he hadn’t consumed any alcohol! When he blew into a breathalyzer, sure enough, he scored a 0.00 BAC. Still, he told the LA Weekly “it was humiliating and intimidating. I felt violated. After that, I looked up my rights.”

Do you need help understanding and protecting your rights after a Los Angeles DUI arrest? Please get in touch with Harvard Law School educated attorney, Michael Kraut, of the Kraut Law Group, for a thorough, free consultation.