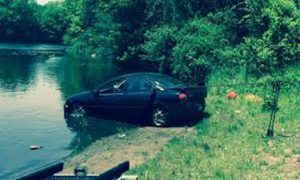 Some Los Angeles DUI arrests are very subtle and not at all obvious.

Police may stop a driver who’s following all the traffic laws and driving at the speed limit for having an out-of-date license plate, for instance. After this stop, the person may raise police suspicions by lacking coordination or answering officer questions incoherently. Over time, thanks to field sobriety tests and breath tests, the authorities suspect DUI.

But sometimes, the signs are far less subtle!

Consider an October 14 story reported out of Virginia — a local man faces DUI and driving without a license charges after local authorities discovered his vehicle submerged in a pond in the town of Lansdowne, VA. Fortunately, no one got hurt in the incident, although the driver, 46-year-old Arturo Romero, had at first feared that a family member had been trapped inside the sinking car.

Meanwhile, elsewhere in Virginia, a woman faces more serious charges of driving DUI with her 3-year-old daughter in the vehicle… and then fleeing the scene of an accident. Authorities arrested 26-year-old Rachael Brand for DUI and child neglect, connecting her with a hit and run accident on I-95. When police pulled her over, they allegedly noticed that her airbags had been deployed, suggesting that she had been in a recent wreck.

As we discussed in our recent post on the terrifying field trip DUI bus ride in Utah, driving under the influence with kids in the car is just not okay. California law severely punishes people who engage in this type of behavior with more jail time and steep fines and fees. A parent who drives with a child in the car can lose parental rights. A parent going through divorce who drives with a child in a car can lose custody or visitation rights.

For help defending against your complex charges, call a qualified Los Angeles DUI defense lawyer with the Kraut Law Group today to set up a free and confidential consultation with former prosecutor Michael Kraut.