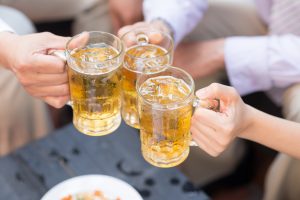 An officer can’t legally pull you over for no apparent reason. The Fourth Amendment of the Constitution  prohibits unlawful search and seizure without a warrant or “probable cause,” and traffic stops fall within that jurisdiction. Thus, if a cop signals for you to pull over, it means he has seen something with your vehicle or with your behavior that gives him “reasonable cause” to investigate further. (An exception to this rule would be a sobriety checkpoint or a police roadblock, in which law enforcement is pulling over everyone equally.)

“Reasonable cause” might be anything from a broken tail light to forgetting to turn on your signal before making a turn, or failing to come to a complete stop at a stop sign. The cause may or may not have anything to do at this point with suspected DUI, but rather with a simple traffic violation. Whatever the case, the cop has noticed something, and he should tell you why he pulled you over when he comes to talk to you. (If he doesn’t volunteer that information, ask. It is your right to know.)

When the officer approaches your vehicle, she will typically begin by asking you to produce your driver’s license and vehicle registration, which she will check against the registration database. During this time, even if the officer didn’t specifically notice erratic driving from you, she is trained to observe your behavior for possible signs that you have been drinking—even the subtlest of clues. These signs may include:

If the officer asks you to step out of the vehicle, she may also observe your coordination and behavior, even absent of an official test. Do you have difficulty exiting the vehicle? Do you lean on the car when you stand up? Do you seem to be swaying or have problems with balance? Are you able to focus?

If the officer pulled you over for driving erratically, he may already suspect DUI—or he may pick up that suspicion after talking with you or noticing your car—often in as little as 60 seconds after beginning to interact with you. Regardless, if the officer suspects at any time during the traffic stop that you have been drinking, he will ask you directly if you’ve had anything to drink. He may ask the question repeatedly, especially if he is not satisfied with the answer compared to your behavior. He may also ask you to step out of the vehicle to observe your behavior, to take a field sobriety test or to submit to a breathalyzer. The goal with these requests is to confirm his suspicions and provide sufficient “probable cause” to arrest you on suspicion of DUI.

At this point in the investigation, be mindful of your rights. You do not have to confess to drinking, nor are you legally required to take any sobriety tests at this point. If you choose to enforce these rights, do not lie to the officer; instead, politely decline to answer questions and/or take the tests.

If the officer continues to suspect you were driving under the influence after this questioning, she will place you under arrest on suspicion of DUI, handcuff you, place you in the patrol car and drive you to the nearest police station or hospital for an official test to measure your blood alcohol content (BAC). Once you have been officially arrested, you are required to submit to these tests under California’s “implied consent” law,  and refusing the tests may result in more charges. If the test reveals a BAC of 0.08 or higher, you will be officially charged with DUI under California Vehicle Code Section 23152(a). You will also be booked, photographed and fingerprinted. At this point, the arresting officer’s interaction with you is complete unless he is called to testify in court regarding your charges.

Understanding the Officer’s Point of View

From the traffic stop to the investigation and the arrest, the entire procedure is designed to catch and arrest legitimate DUI offenders. However, on occasion it can also ensnare people who either had nothing to drink or were well below the legal BAC limit. Officers can misinterpret behavior, breathalyzers can yield false positives, etc. Understanding the officer’s rationale and point of view during the traffic stop can help you determine whether the officer had legitimate probable cause, whether certain evidence is admissible in court, and other factors that an attorney may use to prove your innocence.

If you are facing DUI charges and need legal help, we are here for you. Call our offices for a free case evaluation.