Most Burbank DUI checkpoint arrests are rather pedestrian. A driver maybe has too much to drink at a pool hall in Burbank Town Center and gets stopped on Victory Boulevard by a patrol and tagged for Burbank DUI. Or an entertainment industry executive has a little too much to drink at Warner Bros.’ party on the lot and then get stops on Cahuenga. 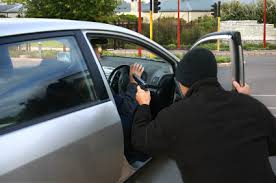 For instance, recently, up in Stanford, CA police at a DUI checkpoint nabbed a driver who was in the midst of committed a carjacking!

According to Sergeant Andrew Gallagher, a Green Honda stopped at a DUI checkpoint. The occupants seemed normal at first. Or was something “off”?

Turns out the driver had been carjacked — and his alleged assailant was sitting next to him, secretly pointing a weapon at his side. 22-year-old Michael Banks – the alleged carjacker – realized that he had steered the driver into a checkpoint. He told the man not to do anything, or else he would harm him. As soon as they got to the checkpoint, however, the driver (bravely) confessed to the police that he had been carjacked.

Authorities promptly yanked Banks out of car and found that he had a 5-inch-knife… along with the driver’s cell phone (which Banks had allegedly confiscated).

Police arrested the 22-year-old and charged him with a slate of crimes, including kidnapping, carrying a weapon in a motor vehicle, threatening, and first degree robbery. Banks was held in jail on a quarter million dollar bond.

DUI arrests in Burbank are common. But carjacking is a much rarer crime. According to Sergeant Gallagher, “[the checkpoint arrest] was pretty amazing … very unusual. You don’t see that very much.”

If you or someone you love was arrested for driving under the influence in Burbank (or elsewhere in the Southland) you may need methodical, smart legal guidance. Fortunately, you can trust former Los Angeles Senior Deputy District Attorney, Michael Kraut, and his seasoned team to provide a thorough and results-focused Burbank DUI defense.