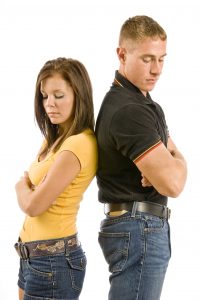 California law paints with pretty broad strokes when defining domestic violence. Essentially, domestic violence is any act of harm, abuse, or threatened abuse committed against someone with whom you are (or have been) in an intimate relationship. “Abuse” is further defined as physically hurting or trying to hurt someone; sexual abuse; harassment/stalking; or making the other person “reasonably apprehensive” that they are in imminent danger.

Putting it in plain English, domestic violence under California law isn’t just about assault or even making physical contact with your significant other. It can also include verbal abuse, psychological/emotional abuse, sexual abuse, stalking, destroying personal property, or even threatening to hurt them. As you can see, it wouldn’t take much to push a heated verbal argument over the line into something considered technically illegal in the eyes of the law.

Now, does this mean you’re going to jail because you hurled an insult at your partner in the heat of an argument, or even made a threat? Not necessarily. While these actions can be considered domestic violence, they must be put into context—and in many cases, that context is framed by the other person involved in the argument. For example, for an insult to cross the line into verbal abuse, the other person would need to interpret it as abusive. After all, people insult one another all the time with no real hurt being dealt, because neither party takes it too seriously. But if your partner describes a pattern of verbal behavior that causes them psychological harm, that behavior might be looked at as domestic violence in context.

By the same token, simply saying you’re going to harm your partner wouldn’t automatically be considered a threat. Your words would have to make the other person feel that they were in danger—that your threat was real, and that you really might do the thing you said you were going to do.

As you can imagine, there’s a grey area here because intent and perception are two things that can be very difficult to prove. But it’s important to know what the law says so you can understand better at what point an argument crosses the line into abuse.

How Arguments Can Lead to Arrest

Now, here’s where things can get murky. Let’s go back to the scenario we described at the beginning—where you’re having a heated argument that sounds violent enough to convince a concerned third party that domestic violence is occurring or imminent. If the police are summoned to the scene, and they observe an argument in progress, they are legally required to take steps to prevent domestic violence from occurring, or to stop it, if it is in progress. If law enforcement perceives an imminent danger, they will arrest at least one of you as a preemptive measure, even if no physical contact was made. In the end, you may or may not be charged, but the arrest itself can still be highly disruptive to you and your family.

Tips to Keep from Crossing the Line

Understanding what’s at stake, and the many ways a family disagreement could be misinterpreted or get out of hand, what can you do to ensure your private business doesn’t turn harmful or become the concern of law enforcement or the courts? Some tips to help:

If things do get out of hand and you find yourself arrested or charged with domestic violence, you need to have a compassionate attorney in your corner—someone who understands the nuances of the law between intent and perception, and who can advocate on your behalf when misunderstandings have occurred. Give us a call today for a free case evaluation.