As this blog has documented over the years, people try a lot of crazy approaches to avoid being charged with a Los Angeles DUI. Some cry. Others flee the scene. Still others try to talk their way out of the charges. 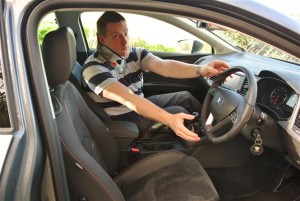 One ploy that doesn’t work too well, however, is switching seats just before the police officer comes up to the vehicle. Just ask Jose Ruiz, age 29, of Providence, Rhode Island. When the police pulled him over, he quickly exchanged places with his passenger, maybe hoping the officer wouldn’t notice the swap. (He did.)

According to a local newspaper, the Warwick Post, when police spotted Ruiz initially, he was swerving into other lanes, and he just barely missed hitting a guard rail. When police pulled him over, they called his bluff and gave him a field sobriety test. He apparently didn’t do too well.

But trying to pretend he wasn’t driving wasn’t Ruiz’s only offense. He had been driving on a suspended license; his vehicle’s windows were too heavily tinted; and there were two bottles of Hennessy (cognac) in the car, one open and one closed. (Ruiz reportedly threw them in the back seat before he got out of the car; that worked about as well in terms of keeping him out of trouble as did changing places with his passenger.)

The final difficulty? Although the car was registered to Ruiz, the plates belong to a rental car company. Uh oh.

According to the Warwick Post, the police threw the book at Ruiz, charging him with misuse of plates, operating a motor vehicle with an open alcohol container, failing to use turn signals, roadway violations, and refusal to submit to a chemical test.

How should you respond to your recent and disarming charges? Call a qualified Los Angeles DUI defense lawyer (andex-prosecutor) with nearly two decades of relevant legal experience.