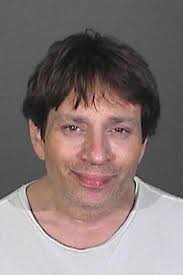 “Saturday Night Live” alumnus, Chris Kattan, was pulled over on Monday for DUI in Los Angeles, according to California Highway Patrol reports.

The 43-year-old Kattan hit a construction truck on the 101 Freeway at around 2 in the morning in Encino. CHP says that the truck had been parked on the shoulder. Kattan suffered a bloody nose in the crash. Fortunately, no construction workers got hurt, since no one was in the vehicle. Police took Kattan to a Van Nuys precinct and booked him.

Authorities say the truck had been well marked with orange cones, signs and flashing arrows. But Kattan apparently did not see those markers. The crash wrecked his 2011 Mercedes and also damaged the construction truck. Prior to the crash, a woman called the police to report a “Mercedes … weaving all over the roadway at slow speeds.”

Kattan — who’s best known for his wild sketch comedy bit (and later movie), The Night at the Roxbury, which he developed with comedian, Jim Carrey — confessed to police that he had been on prescription medications. Police said Kattan took a chemical test for drug DUI. The arresting officer, Leland Tang, told reporters “[Kattan’s accident] could have been lot worse.”

Kattan tweeted to his fans afterwards that “those concerned are just adding gossip: I am fine, passed all tests, released without bail, have driver’s license, cop offered to drive me home.”

Kattan is lucky that he did not get hurt more seriously and that he did not injure other people. Even so, in California, if you’re convicted of a misdemeanor DUI in Los Angeles, prosecutors can still seek an array of punishments, pursuant to California Vehicle Code Section 23152 (A), including:

•    Mandatory 48 hours in custody and up to six months behind bars;
•    A fine of $1,000 in addition to court costs, which can be substantially more than $1,000;
•    The court can impose either formal or informal probation and mandate that you install an Interlock Ignition Device (IID) in your vehicle. This means that you will need to blow a “sober breath” into the device before you can start your car;
•    You may face 6 weeks to 9 months of DUI alcohol school;
•    You can lose your license for a whole year… without the possibility of getting a restricted license for work or school.

For help understanding the nature of your Los Angeles DUI charge, connect with the team here at the Kraut Law Group today for a free, confidential consultation.