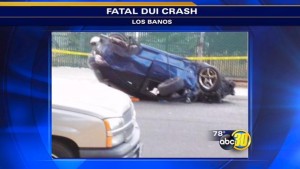 ABC 30 reports that 20-year-old Marcus Perez-Negrete and 19-year-old Casey Giannone had spent the evening drinking before they decided to top off the night with a little street racing. They sped down Santa Rita Avenue; when Negrete got to the stop sign at D Street, he allegedly didn’t bother to stop.

As Perez-Negrete’s blue Saturn Astra barreled through the intersection, it struck a red Chevy Aveo. The Astra flipped over, landing on its roof. Perez-Negrete walked away from the crash; so did his passenger.

Although the 64-year-old driver of the Aveo survived the crash, his 61-year old passenger and co-worker wasn’t as lucky. He died from his injuries. The two men had double bad luck that day; they couldn’t work at their picking jobs, because the field was flooded, and their unplanned return home put them right in the path of Perez-Negrete’s car.

The crash startled people living along the quiet street, waking them with a noise that one resident described as sounding like a bomb exploding.

Police wasted little time in sizing up the situation and taking Perez-Negrete to jail. They charged him with driving under the influence and with vehicular manslaughter. The court set his bond at a substantial $400,000. While his street race competitor didn’t face the manslaughter charge, cops charged her with DUI, reckless driving and driving without a license.