Funnily enough, if you stole a copy of Grand Theft Auto V (set in Los Angeles) you would be charged with petty theft in Burbank. 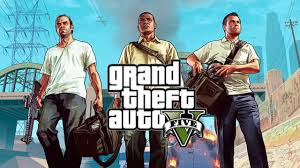 GT5 is a marketing phenomenon, for sure. But the underlying messages – both subtle and not so subtle – are pretty disturbing. The debate about video games, like GT5, that glorify violence and criminal activity, has been going on for decades. Some science suggests that kids (and adults) who play violent video games wind up acting violently themselves and committing crimes.

Of course, in observational science, it is difficult to determine causality. For instance, maybe kids from broken or violent homes play more video games. Their background could explain why video game playing might associate with violence. (In this case, the video games wouldn’t be the cause of the aggression but rather just an association.)

This Burbank theft crime blog is obviously too small to begin to articulate the many points and counterpoints in the “do videogame cause violence?” debate.

But it is useful to consider another strange feature of the game: Southern California freeways that are almost eeriely absent of cars and traffic. The game’s ghostly quiet streets recall the strange calm that happened during “Carmageddon.” It would probably be difficult to create a fun game, if players had to contend with real world obstacles, like bumper to bumper traffic, high gas prices, and the constant threat of drivers texting on cell phones veering into your lane.

This observation is interesting, in that it suggests that traffic conditions might influence the behavior of real world Grand Theft Auto in Los Angeles. Someone who ordinarily might NOT commit a crime could be inspired to steal a car, if opportunity presented and the context made sense. It suggests that context can have a profound effect on criminal behavior.

So if you’re trying to explain (or even just understand) your conduct, don’t just look at your own experiences, psychology and behavior. Also, consider the CONTEXT of your incident and arrest.

If that sounds complicated, it is!

Fortunately, you do not have to tackle your Los Angeles criminal defense by yourself. An experienced Burbank petty theft lawyer with the Kraut Law Group is standing by to provide a free and confidential consultation to help you get to the root of your charges and defend accurately against them.