Some disturbing Los Angeles DUI news: An LAPD officer, 29-year-old Jonathan Chel of Fullerton, was arrested on Friday, after he slammed his car into a McDonald’s drive through in Diamond Bar while DUI. 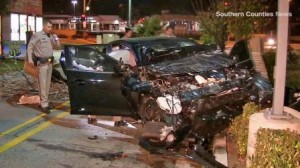 According to a report in the Los Angeles Times, Mr. Chel had been exiting the 60 freeway at Golden Spring’s Drive at around 1 in the morning, when his Mazda slipped off the exit ramp, “launched” across a 50-foot gulf, crashed the McD’s, and finally stopped at Brea Boulevard in Golden Springs.

Per a California Highway Patrol report, rescue workers took Mr. Chel to UC Irvine Medical Center for his injuries. Fortunately, they were not too severe. A CHP officer arrested him at the hospital for DUI. Mr. Chel had been off duty. No one else was hurt in the incident, no other vehicles suffered damage.

“Do you want fries with your DUI?”

The image of a rouge, off-duty LAPD officer smashing through a McDonald’s drive through while DUI sounds almost comical – like something you might see in a spoof movie. However, this incident obviously is no laughing matter. It does, however, allow us to segue into an interesting conversation about the relationship between DUI and food consumption. The rate at which your body processes alcohol depends on many factors, including:

•    Whether or not you eat a meal when you drink;
•    Your metabolic state;
•    Your genetics;
•    Whether you’re a man or a woman;
•    The amount of alcohol you’ve consumed recently and throughout your life — chronic alcohol consumption can also affect your metabolic rate.

Police officers are subject to the same exact DUI laws that citizens must obey, including California Vehicle Code Section 23152(a) and 23152(b), and they, too, can face punishments such as DUI alcohol school, jail time, forced license suspension, and mandatory installation of an Interlock Ignition Device (IID). In addition, a police officer who violates the law – e.g. causes a catastrophic DUI accident — can lose job responsibilities and/or get fired. In fact, if the news reports prove accurate, it would highly unlikely that Mr. Chel would not face serious repercussions at his job — e.g. a suspension, if not an outright termination.

No matter what happened with respect to your Los Angeles DUI arrest, the team here at the Kraut Law Group can provide a free, confidential case assessment. Mr. Kraut is a former Los Angeles prosecutor with relationships with many experts in the field, and he can help you contrive a smart and ethical defense.