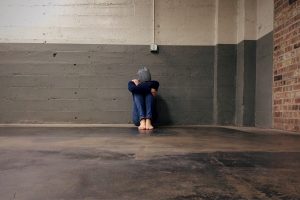 The entire premise of Maid is that the main character, Alex (played by Margaret Qualley) is cut off from her financial stability in her decision to leave. She is reduced to living in a domestic violence shelter and must find work cleaning houses in order to survive–and still lives below the poverty line.

Takeaway for defendants: If you are a defendant in domestic violence accusations, the impact of your actions against your partner may be much farther reaching than just an argument that went south. This is especially true if your partner feels the need to leave for their own protection.

Leaving an abusive relationship is not easy.

In Maid, we see Alex’s backstory through flashbacks as far as her abuse was concerned…but the storyline focuses mainly on her life after the abuse. While the show is punctuated with moments of humor and levity, the fact is that the choice to leave was a difficult one for Alex, and her current challenges underscore that fact.

One of the most ironic (and even tragic) facts of abusive relationships is that the victim is often marginalized and made to feel like they are the one in the wrong for wanting out of the relationship. It’s a psychological turnaround that often works, and the victim relents and stays when leaving would be better and safer for them. It takes the average domestic violence victim seven tries before they actually leave the relationship for good.

Takeaway for defendants: If you’re facing accusations of domestic violence, don’t mistake your partner’s willingness to stay as a sign that nothing is wrong. It’s more difficult to leave an abusive relationship than it appears, and your partner may be suffering more than they are letting on.

There’s an underlying stigma about domestic abuse shelters that often deters survivors from moving in. Shelters are typically thought of as “dirty” places with living conditions that are cramped, uncomfortable, and even unsafe. For this reason, victims are often reluctant to escape an abusive relationship for fear they will go out of the proverbial frying pan into the fire. The truth is that most domestic violence shelters go out of their way to make their residents feel safe and secure—even if the lodgings are modest. Most shelters also have rules about conduct and will evict someone if they feel someone’s safety is being compromised.

Maid successfully deconstructs this wrong mindset by depicting a shelter that is closer to the truth about how most shelters are. The show’s creative team consulted extensively with an actual shelter in Los Angeles to ensure they created a fictional facility that closely resembled the living situations in the real one–including adopting the model of having children sleep in the same room with their mothers and having additional amenities on-premises such as a boutique.

Takeaway for defendants: If you’re facing domestic violence charges or a protective order, don’t make the mistake of presuming that your partner will stay because they lack the resources to leave. There are many organizations and facilities that go out of their way to provide domestic violence survivors the support they need.

Domestic violence is more prevalent toward women of color.

One critique of Maid is that while it works hard to give an accurate depiction of life after an abusive relationship, it fails to acknowledge that women of color are far more likely than white women to be abused. In the show, Alex is white, primarily because Stephanie Land (on whose story the show is based) is white. The show attempts to compensate for this by surrounding Alex with people of color—including some of her bosses. However, the fact is that 40 percent of Black women endure some form of domestic violence in their relationships—a rate far higher than the rate for women in general.

Takeaway: While Maid doesn’t get everything right as far as the typical demographic of domestic violence victims, the fact remains that domestic violence deeply hurts families of all races. If you have been charged with domestic violence, never assume your partner, the alleged victim, has it any better or worse than any other victim. Violence is violence, and it does damage to whomever it touches.

Regardless of your situation or the state of your relationship, being charged with domestic violence is a serious matter with an involved court process. For compassionate legal representation in dealing with the charges, call our offices today for a free consultation.