People arrested for a DUI in Los Angeles don’t always display the best judgment. But if you want proof that excessive alcohol consumption can cause you to do dumb things, consider this story from Lakeland, Florida, where a woman practically begged to be arrested. 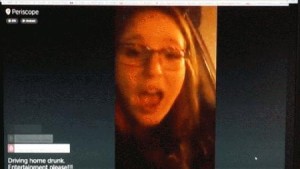 According to WMAZ Channel 13—and media outlets across the country—Jennifer Beall was driving her 2015 Toyota Corolla on Saturday, October 10th, when she decided to broadcast her trip to the world via Periscope, a live streaming app. The only problem was that Beall, age 23, was apparently intoxicated and not afraid to share that information. In the raw video footage, you can hear her say repeatedly that she is “driving drunk.”

Many people watching the broadcast reportedly texted Beall and begged her to stop driving before she killed herself or someone else. Some also alerted the Lakeland Police Department via 911. But the police had a problem, because department regulations don’t allow them to download apps like Periscope; they had no way of watching the streaming video to determine where Beall was driving.

Finally, with the assistance of some 911 callers and a younger officer’s personal computer, police tracked Beall using landmarks they could see in the video. They found her on Carpenters Way in Lakeland. Just as officers prepared to pull her over, Beall hit a curb and flattened the tire on her Toyota.

The police reported that Beall smelled like alcohol, behaved in a disoriented fashion and exhibited bloodshot and glassy eyes. She allegedly failed sobriety tests and refused to take a breathalyzer test, so officers arrested her on DUI charges and took her to the Polk County Jail.

A spokesman for the Lakeland Police Department said he had never seen a case like this before in his 30 years of law enforcement.