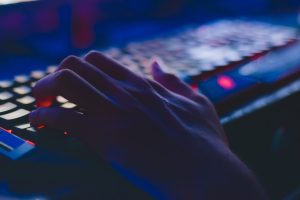 While most people think of domestic violence as the act of physically striking one’s partner or spouse (and indeed, domestic battery accounts for the lion’s share of domestic violence incidents), the State of California counts plenty of other actions as “domestic violence.” In fact, nowadays, you don’t even have to be in the same room as your partner to be charged with a crime! Some people have been surprised to find police at their doorsteps with a warrant for their arrest on domestic violence charges–even though they weren’t anywhere near their alleged victims!

How is this possible? Because perhaps without realizing it, by law, these people were committing domestic violence online.

Under Penal Code 646.9 PC, stalking is defined in California as repeatedly following, harassing, and/or threatening someone in such a way that puts them in reasonable fear for their safety. When you stalk a partner, spouse, or family member in this way, it’s a form of domestic violence. But in 1998, the California legislature amended this law to include the use of “electronic communications” in these harassments and threats—thereby making “cyberstalking” a crime.

Electronic communications can include the use of emails, text, websites, chat apps, social media, etc., to write or post harassing things. Examples of online acts that could be considered cyberstalking include:

In your mind, perhaps you’ve just taken the argument you’ve been having with your partner online—but in the eyes of the law, your partner may be able to use any of these activities as a reason to have you arrested and charged with domestic violence.

Posting Harmful Information on the Internet (aka, Indirect Electronic Harassment)

This crime is similar in scope to cyberstalking but with one main distinction: instead of personally harassing or attacking the person online, you use the Internet to damage that person’s reputation and/or encourage others to harass, threaten, or harm them. (Penal Code 653.2 PC) Examples of this crime include:

As you can see, this crime is less about personally attacking the victim and more about using the Internet as a weapon to harm them indirectly. But because it’s still domestic violence, the penalties will be just as severe if you’re convicted.

When you make a credible threat to someone that you intend to kill them or cause them great harm, this falls under the category of criminal threats in California (Penal Code 422 PC). When you do it to a spouse, partner, or significant other, it’s an act of domestic violence. Again, as with stalking, criminal threats can also be committed online using electronic communications. But unlike cyberstalking, which is more about harassment, an online criminal threat is when you use online resources to make a direct threat of harm. Examples might include:

Perhaps you didn’t mean your text or post as an actual, “credible threat.” Maybe, in your mind, you were just venting. But if your partner sees it as a threat to their safety, they can report it to police to have you arrested on domestic violence charges—and the emails, texts, and or posts are turned over as evidence (so it’s not “your word against theirs”).

A Warning Against Defending Yourself Online

Just as online communications now can be used to commit acts of domestic violence, if you’ve been accused of domestic violence, it’s a common impulse to want to defend yourself online using social media, email blasts, websites, etc. While it may feel cathartic at the moment to “tell your side of the story” and get support from friends and family, remember that anything you say online can be obtained by prosecutors, saved, and used as evidence against you. Even if your social media post or website is taken down within hours, it may still live on in the form of screenshots and copies that can be used against you.

As with any other criminal charge, the best way to defend yourself against accusations of online domestic violence is to speak with an experienced criminal defense attorney who can give you personalized legal advice and help you build the strongest possible defense. Call our offices today to schedule a consultation.