The dangers of driving under the influence in Burbank have increased dramatically, thanks to the drenching rain that has doused the Southland. AccuWeather projections predict that the rain will last at least until (or through) Friday, potentially causing local flooding, traffic snarls, and changes to typical freeway congestion patterns. 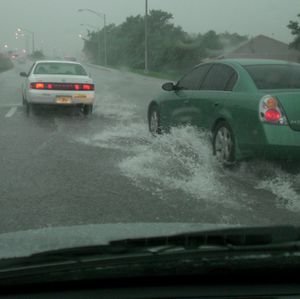 How does heavy rain impact risk for Burbank DUI?

Rain in general can increase driving dangers, including the dangers from Southern California DUI

Rain can make certain driving decisions appear more or less dangerous than they actually are. For instance, let’s say you’re driving through a flooded freeway. You might be thus inclined to be more cautious than you normally would — and this overcompensation would result in a net improvement in safety over how you normally drive. On the other hand, rain keeps some people off the roads. Thus, you might interpret this absence of traffic as a “green light” to go faster, and this would result in your driving less safely than you normally would.

According to the statistical analyses of auto and airplane crashes, accidents often result from multiple errors strung together. Consider a theoretical plane crash. The pilot may be more fatigued than usual; he might be flying into foggy weather; his instrument panel might be below grade; and his copilot might be distracted due to a fight he had earlier in the morning with his brother. Taken individually, these factors might not lead to an accident. Taken together, however, these x-factors could create a lethal mix… and lead to a plane crash.

To bring us back from this digression… the implication is that additional road risk factors, such as the rain beating down on Southern California, can (at least theoretically) increase the likelihood that “close calls” wind up as accidents. For instance, let’s say there is a guy who’s driving DUI in Burbank. Under ordinary situations, he would steer clear of obstacles. But add in the element of rainsoaked highways, and this could cause enough of a disturbance to lead to an accident.

Obviously, history works in only one direction, and there’s no way to analyze these kinds of counterfactuals.

Given the increased risks out there, now might be a useful time to do a quick refresher course on the common DUI symptoms. These include but are not limited to: disheveled appearance, mumbling speech, bloodshot eyes, incoherent storytelling, verbal gaffes, clear misstatements of fact, bad driving, and poor motor control/stumbling.

Whether you face a first-time misdemeanor charge of Encino DUI, or you’re battling a complicated DUI manslaughter in Long Beach charge, good legal help is a must.

Many people arrested in the Valley for DUI have turned to former prosecutor Michael Kraut, a former senior Deputy District Attorney for Los Angeles. Attorney Kraut has demonstrated a remarkable ability to build coherent defenses to complicated charges. He knows firsthand how prosecutors operate, and he can often anticipate the reactions of judges to construct more effective defenses for his clients.