If you were recently stopped for driving under the influence in Beverly Hills – either at a checkpoint or on Santa Monica Boulevard or wherever – you probably feel pretty humiliated and frustrated. Perhaps you should be. But odds are that your stop was not nearly as embarrassing as what happened to 20-year old Bryan Gray of Aurora, Illinois last week. According to local Illinois police reports, Aurora pulled off a trifecta of bad driving behaviors. Surprise, surprise, these actions culminated in an injury accident. Police said that Gray had been doing the following dangerous acts – all in combination: 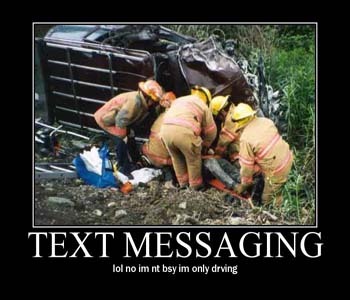 1. Speeding
2. Texting while driving
3. Driving under the influence of alcohol

To make matters worse, he drove early in the morning on Sunday – one of the more dangerous times to be out on the road. (so many drivers are coming back from bars and late night parties).

Anyway, guess what happened? While he texting his brother, Gray glanced up and noticed – way too late – that he was driving straight into a building. He couldn’t stop and instead slammed into a building on 3000 Weber Drive. Fortunately, Gray was not killed, nor was anyone else. But it’s easy to see how a situation like that could have led to a fatality or multiple serious injuries.

Illinois residents probably remember all too well the rather sickening story of police officer Matt Mitchell, who killed two teenage girls while travelling at over 100 miles per hour WHILE text messaging on his phone. Mitchell earned national headlines (and a lot of rage) when he turned around and sued the state for workers’ comp benefits for injuries he sustained in that crash (he was on duty at the time).

Your Los Angeles DUI attorney will need to go over every aspect of your case to determine what arguments prosecutors might make against you. Dangerous actions that you took – or safety precautions that you failed to take – can be used against you. For instance, had Gray not been speeding or driving under the influence, he still might have crashed into the building and hurt himself and other people. But because he allegedly engaged in all three dangerous activities at once, prosecutors have more “ammunition” against him.

To craft your most appropriate defense of the Beverly Hills DUI, you need to be very forthcoming with your Los Angeles DUI attorney – honest and open about what happened – and you have to anticipate and effectively counter argue the charges and evidence that the prosecution will throw against you.

Of course, understanding what the prosecution will do requires being able to put on a “prosecutor’s hat” and think like the other side will. Even experienced and adept attorneys who deal with cases like DUI in Beverly Hills are often unable to do this because they’ve never fought legal battles from the other side. Fortunately, you have an ally in attorney Michael Kraut. As the founder of the Kraut Law Group in Beverly Hills (9107 Wilshire Blvd., Suite 450, Beverly Hills, California 90210 Phone: (310) 550-6935), Mr. Kraut actually served as a prosecutor for a long time – over 14 years. He uses this unique perspective and his insights into the prosecutor’s mindset to come up with efficient, compassionate, and successful strategies for his clients. Mr. Kraut is a Harvard Law School educated attorney, and he provides free and confidential case consultations.