If a government prosecutor pleaded guilty to a charge of DUI in Los Angeles—for the second time in less than two years—would that prosecutor go to jail? Would someone who wasn’t as well connected end up behind bars? While there’s no way to tell what might happen in Los Angeles, in San Diego County, Deputy District Attorney Rebecca Ocain has avoided jail time in her second DUI case. 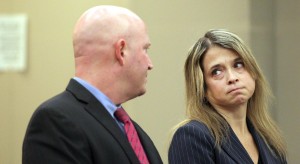 The San Diego Union Tribune reported that Ocain, age 39, had pled guilty early in October to a misdemeanor charge of DUI and hit-and-run. Police arrested her in August after she crashed into a cemetery wall and then ran from the scene on foot.

Ocain, who broke her arm during her encounter with the wall, had a blood alcohol content of 0.30%, according to a test taken about an hour after her arrest. That’s nearly four times the legal limit, as defined by California Vehicle Code Section 23152 of 0.08%. But the BAC number San Diego County used during her arraignment in August was 0.20%. In her previous arrest the year before, her BAC was 0.28%. (For reference, a BAC of 0.40% is often fatal.)

The San Diego prosecutor asked that Ocain go to jail for 90 days. But after reviewing 30 similar cases, Judge Matthew C. Braner spared her any jail time. Instead, he ordered her to wear an alcohol-monitoring ankle bracelet for 90 days. After that, she’ll be on home detention for another four months. During these times, Ocain must also enroll in an alcohol education program for repeat offenders. She’ll pay more than $2,500 in fines.

Readers of the San Diego Union Tribune think that Ocain got a sweet deal. The paper’s online poll (included in their report of the case) asked whether a member of the public would go to jail under similar circumstances. The newspaper reported that 76 percent of respondents said yes, while only 24 percent said no.