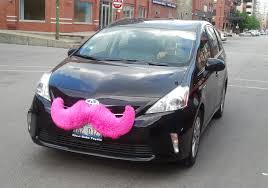 Since the arrest occurred more than a decade ago, however, Lyft didn’t pick it up when Edmonds applied to be a driver for them. Lyft’s rule is that their drivers can’t have had a DUI or drug conviction for the last seven years; they’ve fired him since his arrest.

Grant said he’s willing to use Lyft again, and the service gave him five free rides because of the trouble that he had.

If Edmonds had been driving in California, prosecutors would likely treat him as a first-time DUI offender, since his initial arrest was more than five years ago. That means—under California Vehicle Code 14601.2—that he could spend 10 days to six months in the county jail and pay between $300 and $1,000 in fines. If he lived in Los Angeles County, Edmonds would also have to install an ignition interlock device on his vehicle.