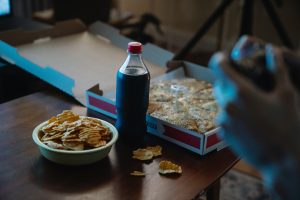 Remember the phrase “you are what you eat”? It may have even deeper connotations than we once thought. Numerous studies in recent years have discovered interesting and surprising connections between poor diet and a higher propensity to commit violence. Let’s look at just a few examples of how elements of your diet may influence your behavior.

We know that a diet high in trans fats (e.g. partially hydrogenated oils) increases your risk for heart disease, high cholesterol, and obesity—but it may also cause you to be more aggressive. Studies have shown that eating trans fats can cause long-lasting changes in aggressive behavior. The reason? Trans fats trigger an increase in Omega-6 fatty acids and a deficit of Omega-3 fatty acids, both of which can make a person’s mood dour and more aggressive.

Many of us know that a steady intake of too much sugar can increase blood sugar levels and insulin production, which can lead to type 2 diabetes. But one study in particular found a distinct link between low glucose levels and increased aggression in married couples. The right kind of sugars are not bad for us in moderation, but when our blood sugar gets too low, or if our bodies can’t process sugar correctly, it can directly affect our mood, make us angrier, and possibly make us more prone to violence.

While we don’t need lithium in large quantities, many dietitians consider it an essential element. The presence of lithium tends to have a calming effect (which is why it’s often prescribed for bipolarity disorders), while lithium deficiencies have been linked to higher instances of aggression, suicide, and homicide. Lithium occurs naturally in many of the healthy foods we eat and the water we drink, but water treatment tends to remove lithium from our water supply, which means many of us aren’t getting enough of it—especially when we don’t eat right.

Bottom line: A person’s diet can play a large role in their risk of committing domestic violence. If your diet consists mainly of junk food, fast food, microwavable meals, or other unhealthy food, this can contribute to an increased chance of aggressive tendencies. A healthy and balanced diet consisting of some lean protein, fresh vegetables, and fruit can help balance out moods and reduce the risk for violent behavior.

It’s an obvious oversimplification to suggest someone gets violent just because they didn’t get enough sleep. However, researchers have found that poor sleep habits and sleep deprivation can increase the risk of domestic violence, especially among those who are already prone to it. Studies have definitively linked a lack of sleep with an increase in irritability and aggression. One study specifically looked at a group of DV victims and discovered that half of the victims suffered violence on days after their partner had a poor night’s sleep.

For many people, of course, the answer isn’t always as simple as “get more sleep” or “go to bed earlier.” It’s not always the amount of sleep that causes the problem, but rather the quality of sleep. Many types of sleep disorders can cause a general deficit in the amount of sleep you need, including any/all of the following:

Bottom line: If you’re exhausted and not sleeping enough on a regular basis, this could lead to irritability and increased stress levels. This, in turn, can cause you to act aggressively—particularly towards people who are close to you, like your spouse or partner. If you find yourself unable to get 7-8 hours of uninterrupted sleep per night due to some type of disorder, getting medical treatment could reduce the risk of aggressive behavior toward your partner.

Identifying possible triggering behaviors and habits can help you reduce the risk of repeated domestic violence offenses. If you are facing charges of domestic violence in Los Angeles, our attorneys are here to help. Call our office today for a free case evaluation.