This morning homes and other property in the San Fernando Valley woke up to flames caused by an arsonist. The fire began at 2 AM on Sunday morning and is suspected to be caused by an arsonist. By early Monday morning, 3,200 acres had burnt so far and with 60 mile per hour Santa Ana winds feeding the fire. In the early morning hours the containment was good until sometime after 7 AM when the winds picked up the number fell to 5% containment. The fire then spread to an additional 1500 acres. The fire is being called the Marek Fire because of the location.

The resources that have responded to this crisis have been amazing. Over 200 fire engines have been assigned to fight the fires . LA County and LA City Fire Departments have assigned over 1000 fire fighters, plus police and other law enforcement personnel to assist the fire personnel. 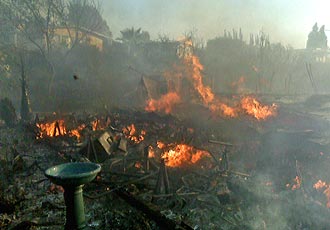 A mobile home park was fully engulfed in the flames and so far as many as 10 homes have already been lost. People and horses were being evacuated.

Because the fires are now presumed to be suspicious in origin, the police and fire investigators are trying to locate the suspected arsonist. Arson in California is a very serious crime and is considered a “Strike” offense and is punishable by 8 years in prison. Anyone convicted of this serious crime will also be required to pay restitution to all of the victims who lost homes and property as well as the full cost to law enforcement. Anyone suspected of being involved with the fire or is hiding the person who started the fire should immediately hire a Los Angeles arson attorney.